Stay tuned- additional details will be posted as they are available! 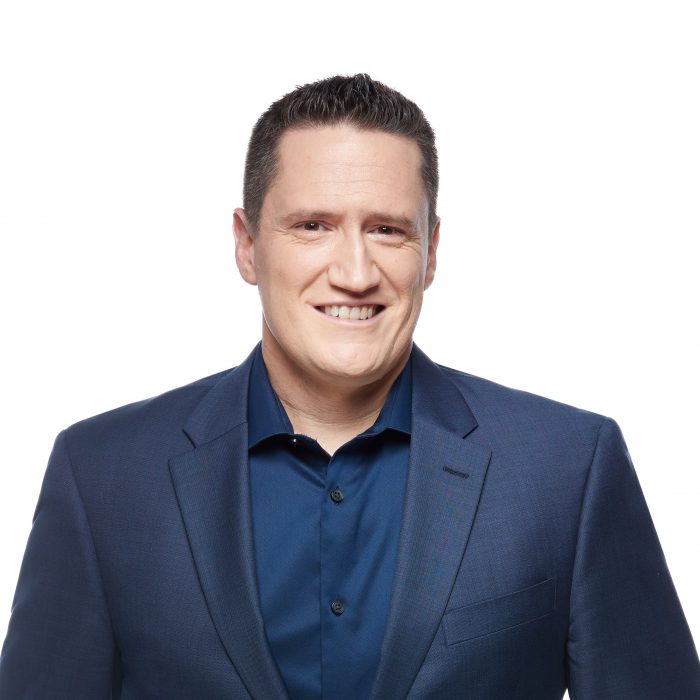 Benoit Charette, Minister of the Environment and the Fight Against Climate Change, Quebec National Assembly

Born in Saint-Jérôme on July 19, 1976, Benoit Charette has been the Member of the National Assembly for the riding of Deux-Montagnes, in the Laurentians, since December 8, 2008. He has been Minister of the Environment and Climate Change since, January, 2019. He has also been Minister responsible for the Laval region since August, 2020 and Minister responsible for the Fight against Racism since February, 2021.

A graduate of the National School of Public Administration and the Université du Québec in Montréal, Mr. Charette got involved very early on in the international scene. After volunteering in Haiti in 1995, he worked at the Quebec Government Office in Mexico City and at the Quebec Ministry of International Relations. He then became program manager at the Agence intergouvernementale de la Francophonie.

Socially involved, Mr. Charette held the position of Executive Director of the Forum jeunesse des Laurentides from 2003 to 2005. From 2005- 2008, he worked as a local program manager at L’Œuvre Léger. Over the years, he has served on several boards of community organizations.

Mr. Charette is the father of three children. 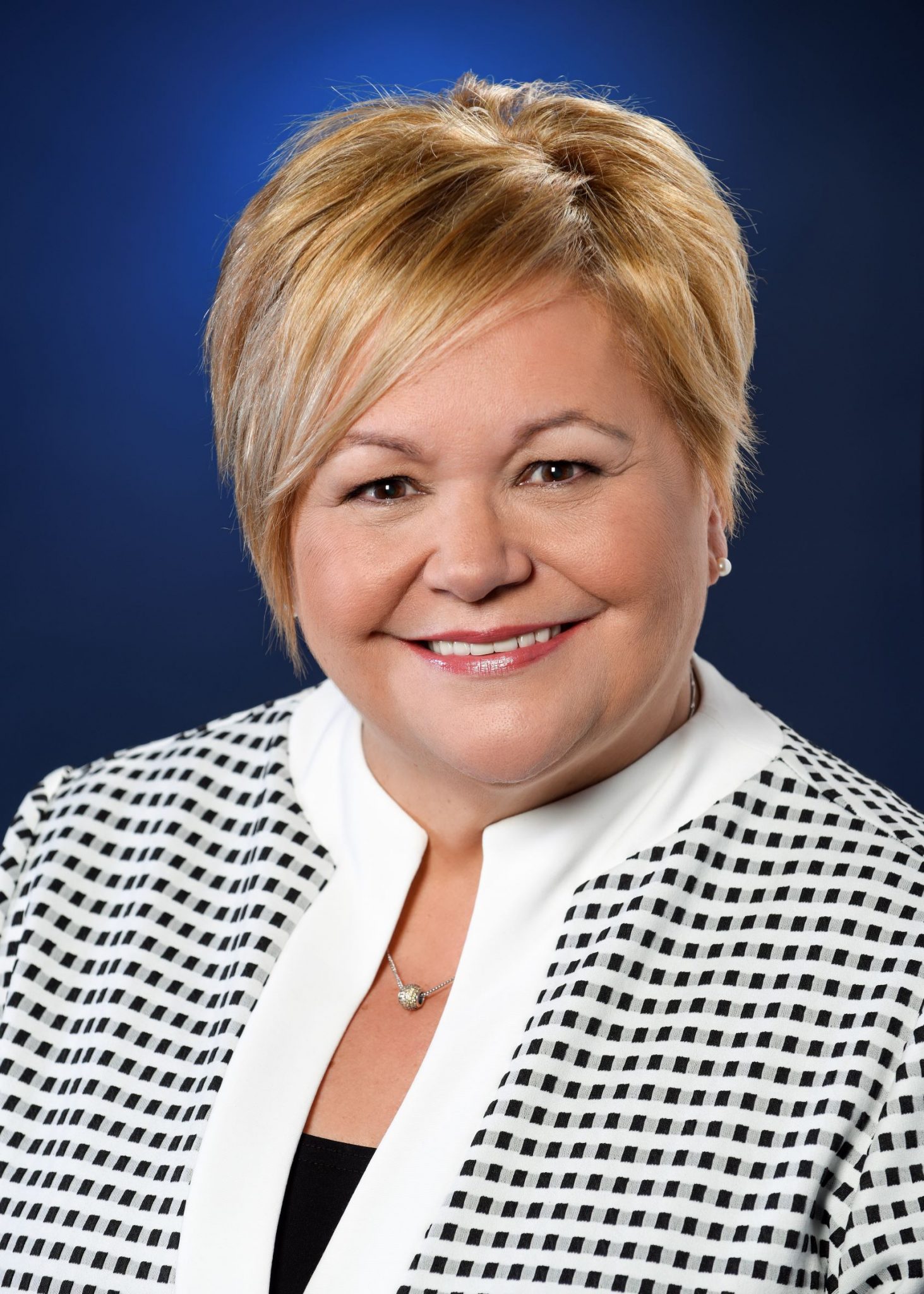 Suzanne Verreault completed a diploma in office automation at Cégep François-Xavier-Garneau. She has also taken various courses in communication.

She has worked as an administrative assistant in both the public and private sector, including various departments of the Government of Quebec as well as in industrial and commercial project management in Quebec City. She has also been co-owner of a residential renovation company.

Suzanne Verreault is involved in her community and has volunteered with various organizations, including a minor hockey team in Sainte-Foy and the Centraide (United Way) organization.

A municipal councillor since 2009, she has been president of the borough of La Cité-Limoilou and served on the boards of ExpoCité and the Quebec public Transit Society (RTC). She was Chair of the Residual Materials Management Committee and Vice-President of the Commission on Urban Planning and Conservation.

As a member of the Executive Committee, she is responsible for the following issues: environment, sustainable development, waste management and water treatment. She is also responsible for establishing the Centre d’expertise en développement durable and is the Chair of the Urban Planning and Conservation Commission. 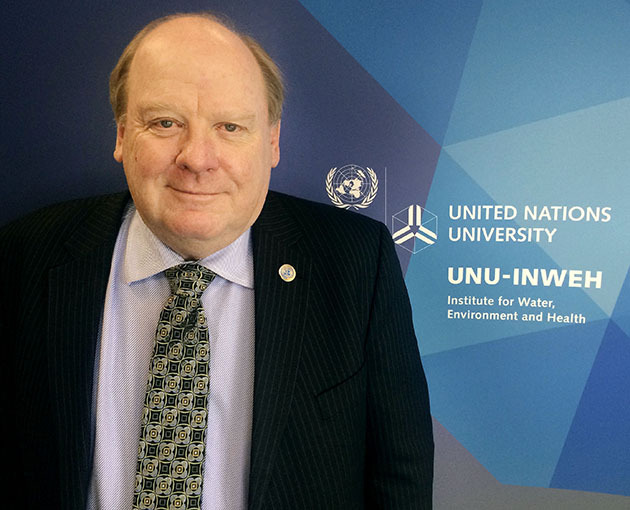 Bob Sandford, Chair in Water and Climate Security at the United Nations University Institute for Water, Environment and Health

Bob Sandford holds the Global Water Futures Chair in Water and Climate Security at the United Nations University Institute for Water, Environment and Health. In this capacity Bob was the co-author of the UN Water in the World We Want report on post-2015 global sustainable development goals relating to water. He is also lead author of Canada in the Global World, a new United Nations expert report examining the capacity of Canada’s water sector to meet and help others meet the United Nations 2030 Transforming Our World water-related Sustainable Development Goals.

In his work Bob is committed to translating scientific research outcomes into language decision-makers can use to craft timely and meaningful public policy and to bringing international example to bear on local water issues. To this end, Bob is also senior advisor on water issues for the Interaction Council, a global public policy forum composed of more than thirty former Heads of State including Canadian Prime Minister Jean Chretien, U.S. President Bill Clinton and the former Prime Minister of Norway, Gro Brundtland. Bob is also a Fellow of the Centre for Hydrology at the University of Saskatchewan and a member of Canada’s Forum for Leadership on Water (FLOW), a national water policy research group centred in Toronto. Bob is also the author, co-author or editor of more than thirty books. 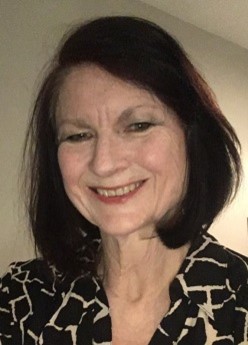 Angela established the first Queensland freshwater research institute at Griffith University in 1987. Environmental flows research started with the assessment of water flows to support river fish communities, and progressed to frameworks that address the needs of riverine ecosystems at regional scale (e.g. ELOHA). In 2012 Angela published “Environmental Flows: Saving Rivers in the Third Millennium” (University of California Press). She led “The Brisbane Declaration and Global Action Agenda on Environmental Flows (2018)” [https://doi.org/10.3389/fenvs.2018.00045], calling for action to protect and restore the water regimes of freshwater ecosystems, and their links to groundwater and estuarine systems. Recent activities include government advisory roles to protect the floodplain rivers of Australia’s Lake Eyre Basin, and production of a special issue on “Springs of the Great Artesian Basin” [https://www.royalsocietyqld.org/2020-springs-special-issue-vol-126/]. 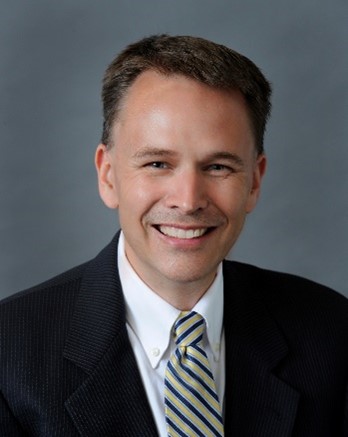 Peter Johnson serves as the Deputy Director of the Great Lakes St. Lawrence Governors and Premiers. The organization unites eight U.S. Governors and two Canadian Premiers working together to grow
the region’s $6 trillion economy and protect its world-class environment. Peter helped facilitate the negotiation and served as primary draftsman of the “Great Lakes Compact” and the companion cross-border Agreement–historic agreements and legislation that allow the eight U.S. Great Lakes States, Ontario and Québec to cooperatively manage water use in the Great Lakes- St. Lawrence Basin. He now serves as the Secretary to the Governors’ Compact Council and serves as primary staff support to both organizations.

He has a B.A. in Political Science from North Park University, a J.D. from Boston College Law School, and has been a member of the Illinois Bar since 1991. 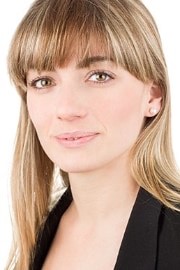 As a socio-economist, Sarah Dousse has many years of experience in identifying, supervising and monitoring international development assistance policies in the areas of water supply, sanitation, water resource management, community agriculture and rural development.
Prior to engaging with the International Secretariat for Water, she worked with local communities and for the Swiss Ministry of Foreign Affairs, where she was involved in advocating for the acceleration of the implementation of human rights to water and sanitation and for the defense of a dedicated water goal in the United Nations 2030 Agenda for Sustainable Development. 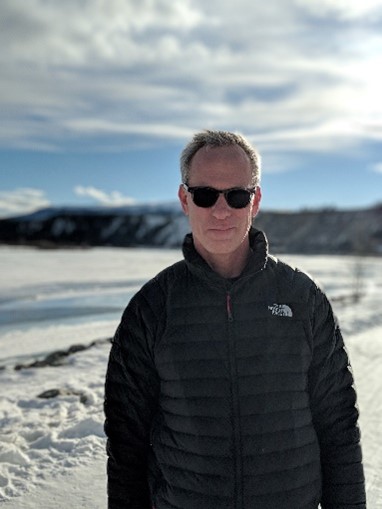 Mr. Jamie Smith began as Environment and Climate Change Canada (ECCC) Chief Data and Results Officer on July 6, 2020 and comes from a strong background in data management and analytics both within and outside the department. Mr. Smith has held various posts within the federal government including at Environment Canada, the Privy Council Office and the Treasury Board Secretariat. Mr. Smith returned to ECCC in 2008 supporting the Ministers office and has since concentrated on water, weather and climate data; earth observations; monitoring network planning; and collaborating with Provinces and Territories to establish agreements to share data before assuming his current position. 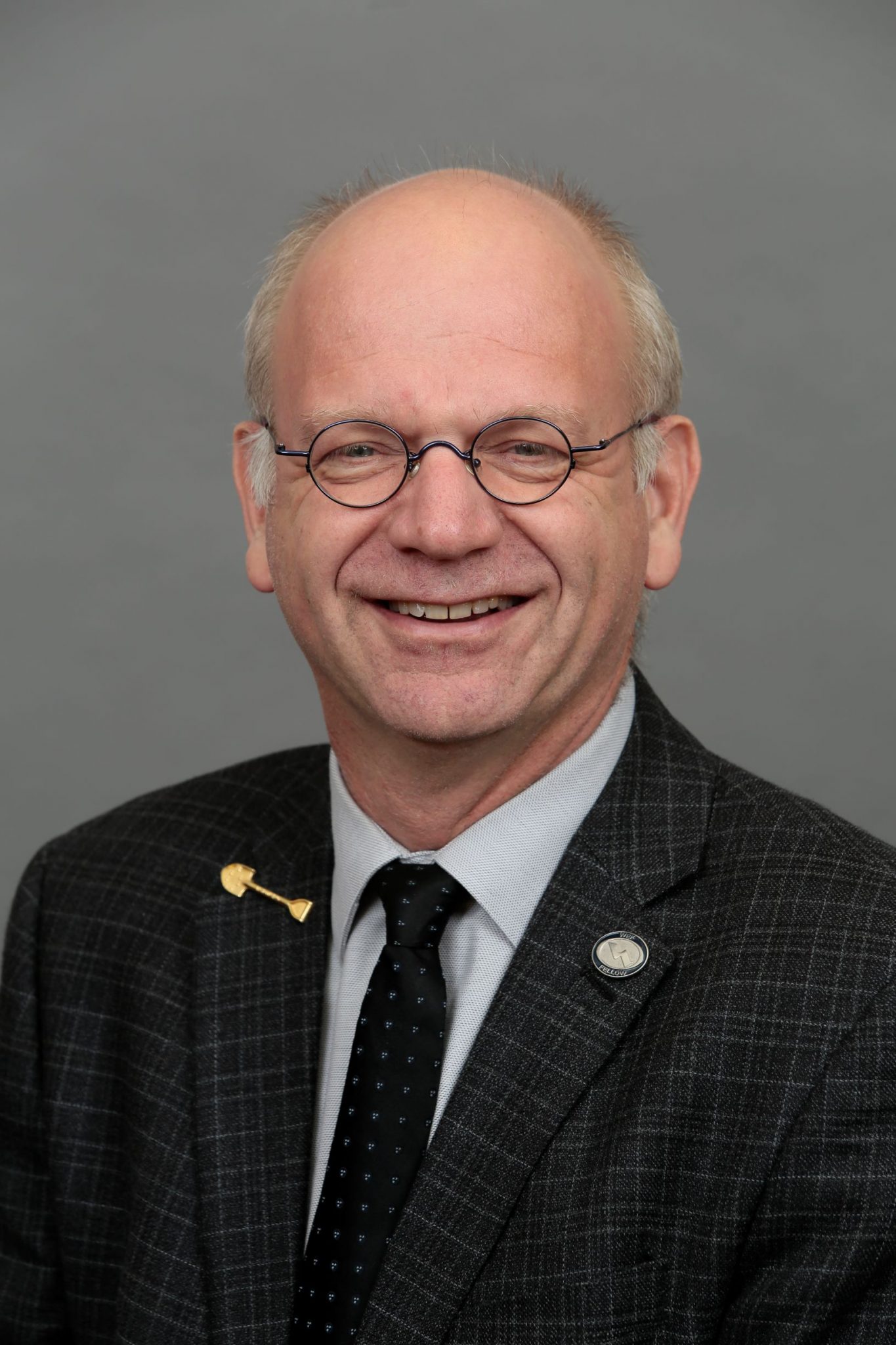 Peter Vanrolleghem is a bio-engineer from Ghent University (Belgium) with a specialization in industrial microbiology. He is Full Professor in the Department of Civil and Water Engineering at Université Laval where he established modelEAU,  a research group focused on water quality modelling at different scales : wastewater treatment, integrated urban wastewater system and watershed. The environmental problems studied are nutrients, greenhouse gases and micropollutants. He was a member of the Board of Directors of the International Water Association (IWA) (2012- 2016) and an Inaugural Fellow. He was appointed Fellow of the Water Environment Federation (WEF) where he was the Québec representative from 2011-2016,  and was a member of its Board of Directors (2016-2019). Currently, he is Vice-President of the Canadian Water Quality Association (ACQE) representing Eastern Canada, is an active member of Réseau Environnement. In February 2015, he was appointed director of CentrEau, Quebec’s interdisciplinary water research center, bringing together passionate water resource professionals from the province and beyond. He also heads Osmoz since 2019, a new research consortium set up by the Québec government to support research related to water governance and management.

Pierre Béland, Co-Chair for the Canadian Section of the International Joint Commission

Pierre Béland is a scientist in environmental biology and toxicology, best known as an expert on the conservation of beluga whales. He was a founder and research scientist with the St. Lawrence National Institute of Ecotoxicology, an NGO dedicated to research and education on toxic compounds in estuarine ecosystems.

Dr. Béland has published three books, numerous scientific and popular articles, has hosted a TV series on the environment, and participated in several documentary films. He served for ten years as a Commissioner for BAPE, the Quebec environmental assessment Board. He has chaired public hearings for various agencies such as Parks Canada, Fisheries and Oceans Canada, Quebec Energy Efficiency Agency, Telus. Previously he headed the Fisheries Ecology Research Center with the Department of Fisheries and Oceans Canada, and was a paleoecologist with the National Museum of Nature. From Sept 1995 to Sept 1998, Dr. Béland was one of three Canadian Commissioners (and Acting Chair) with the International Joint Commission.

Until recently he owned and managed a company manufacturing equipment for research and management of aquatic and marine ecosystems. His most recent duties were as a Director of AquaForum, whose AquaHacking Challenge is a Canada-wide competition for graduate students and innovators aiming to create start-ups in the field of water technology and the blue economy.

Dr.  Béland holds a BA and a BSc from Laval University (Quebec City), and a PhD from Dalhousie University (Halifax). He was a Post-Doctoral Fellow at ORSTOM Centre, New Caledonia, and at the University of Queensland, Australia. He resides in Montreal, QC; he is fluent in French and English and proficient in Mandarin. 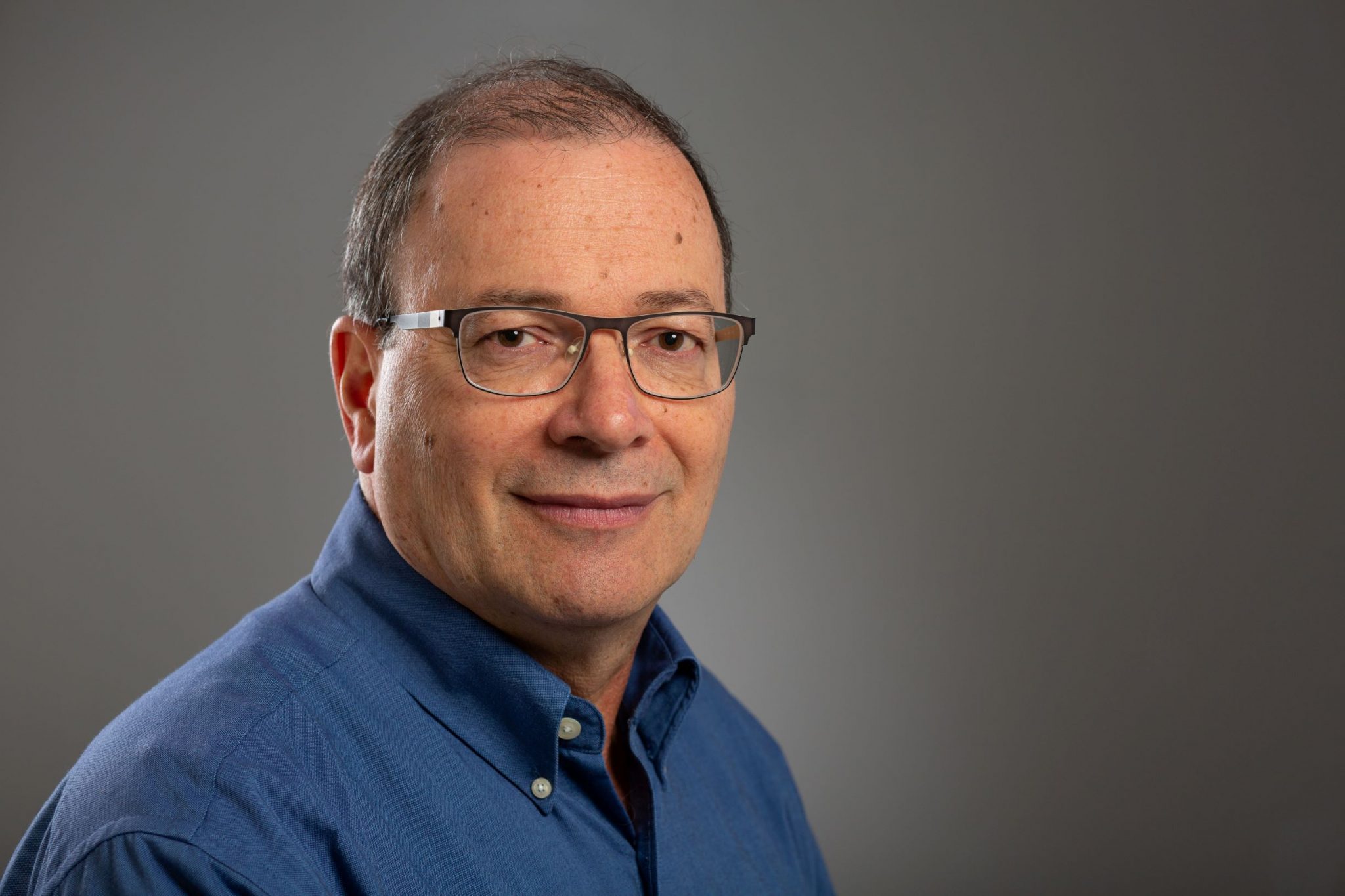 Dr. Kleiner acquired his undergraduate and master’s degrees at Technion- Israel Institute of Technology, and his Ph.D. degree at the University of Toronto. With the National Research Council of Canada since 1996, he is involved in developing methodologies for analysis and decision optimisation of water distribution and sewer systems rehabilitation and renewal. In recent years much of his research has focused on water and wastewater infrastructure in the Arctic. He has authored and co-authored over 130 papers, books and reports related to these subjects. Prior to his current research position he gained substantial international experience in the design, planning and analysis of urban, rural and agricultural water supply, sewage, drainage and irrigation systems, working for engineering consulting firms and equipment manufacturers. 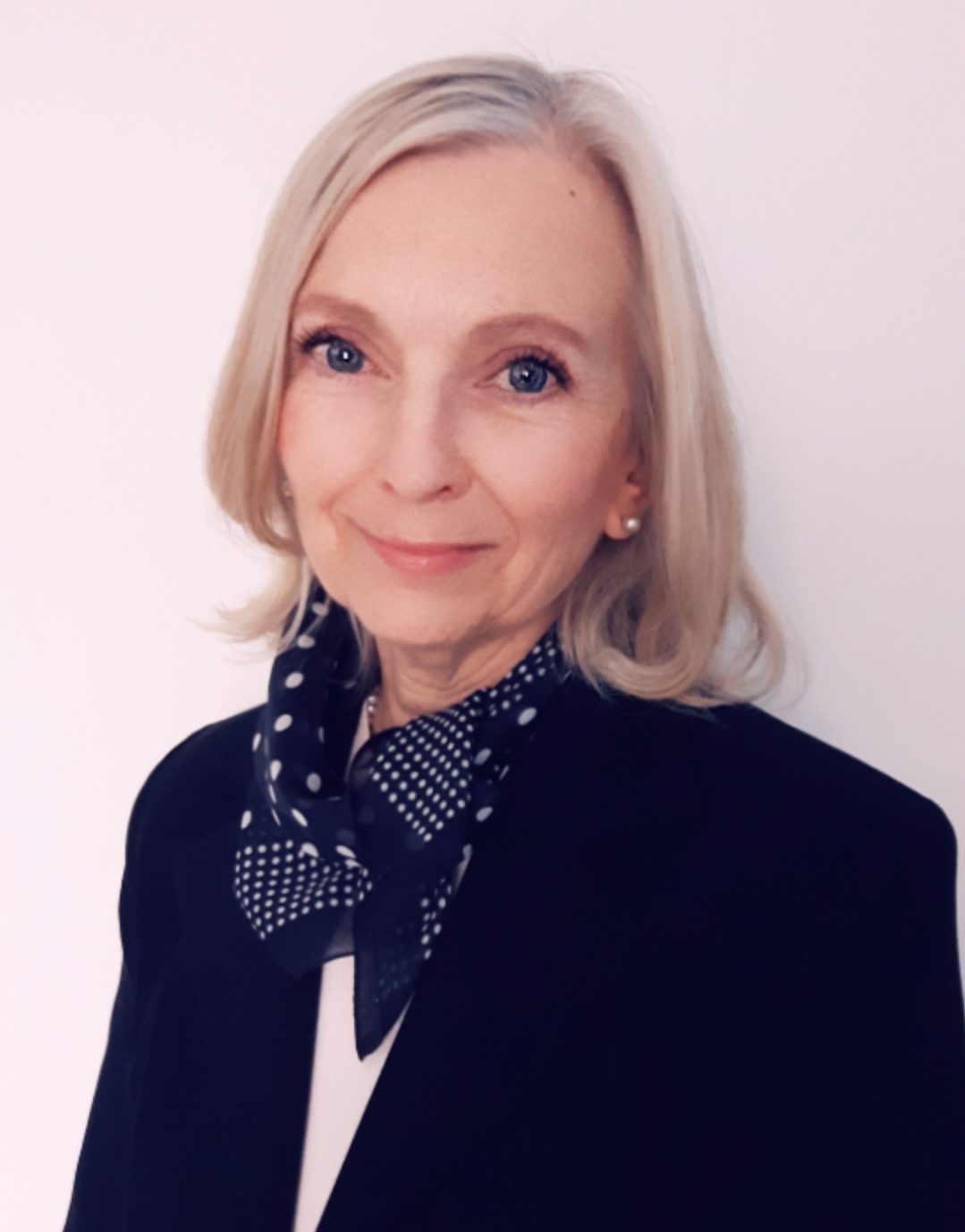 Louise Babineau, Department of Planning, Land Use and the Environment, City of Quebec

Louise Babineau has a Bachelor’s in Geography from Université Laval and a Master’s of Water Science from INRS-ETE and has worked for the City of Quebec since 1992. Her work has included acquiring knowledge and developing programs related to waterbodies and wetlands where she has been involved in promoting watershed management, particularly the protection of drinking water catchment areas. Since 2005, Louise has been working with the Engineering Department to develop flood protection measures for citizens living along the Lorette River. In 2018, she established and now coordinates the Quebec City Standing Committee on Flood and Ice Jam Prevention. This inter-departmental committee brings together municipal stakeholders involved in flood risk prevention. 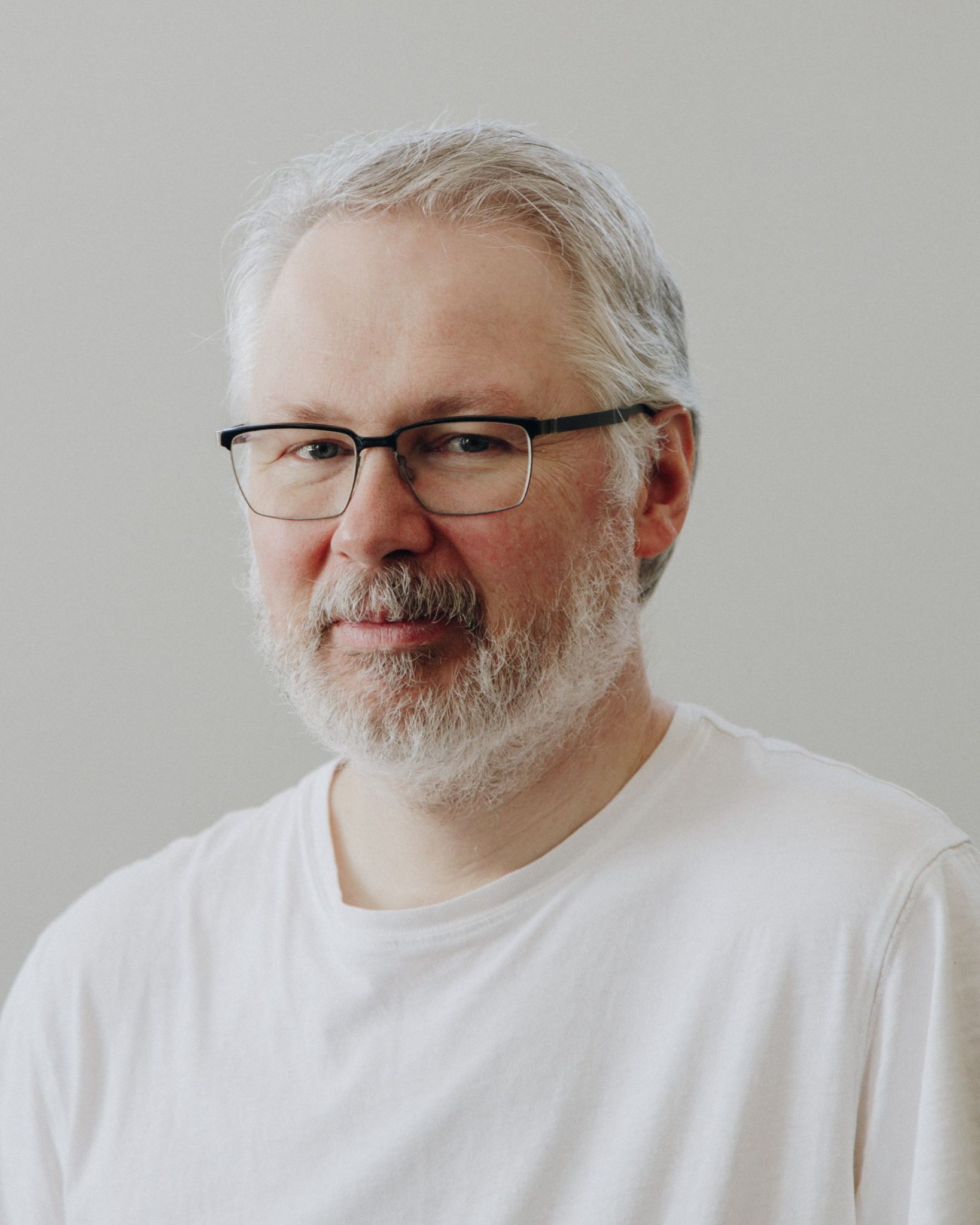 Bert van Duin, founding member and past president of the Alberta Low Impact Development Partnership, is the Drainage Technical Lead at the City of Calgary Water Resources, where he is responsible for supporting the evolution of Calgary’s stormwater management practice. He is adjunct professor at the Universities of Calgary and Alberta, and is also greatly involved with the creation of national stormwater management guidance and standards under the auspices of the Canadian Standards Association.