This special issue of the Canadian Water Resources Journal will present papers from the CWRA 2022 conference theme “Valuing Shared Waters”. This theme focuses on shared uses of water such as its cultural significance, agricultural and ecological needs versus industrial needs, respecting and upholding Indigenous rights, and the roles of municipalities, governments, and industry. This special issue will present diverse perspectives, with special emphasis on those of indigenous peoples, and explore the lessons learned that feature transdisciplinary and transformational approaches to collaborating on Canadian water management and shared uses. The goal will be to publish the special issue in the summer of 2023.  An open invitation to CWRA 2022 presenters will be sent out during the conference this week, and session chairs have been asked to identify at least one outstanding contribution per session that will be considered for a special invitation in the summer of 2022. We look forward to reading this proposed special issue of the CWRJ next year and learning about the incredible water science research being completed in Canada.

Members can head on over to the Conference video page to view the presentations that were available both in-person and virtually! If you think you should be a memberbut don’t have your member login, please email us at info@cwra.org. 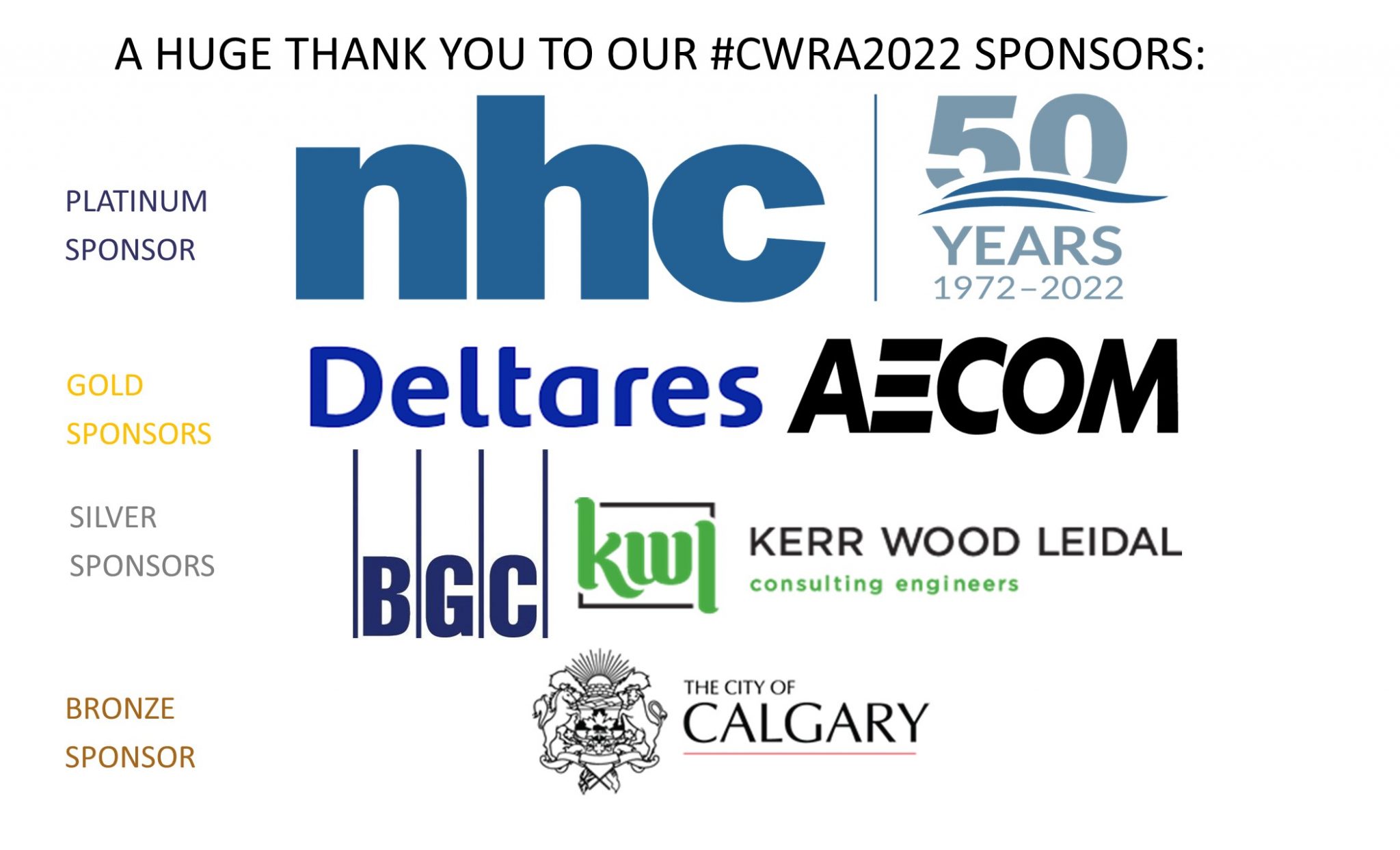 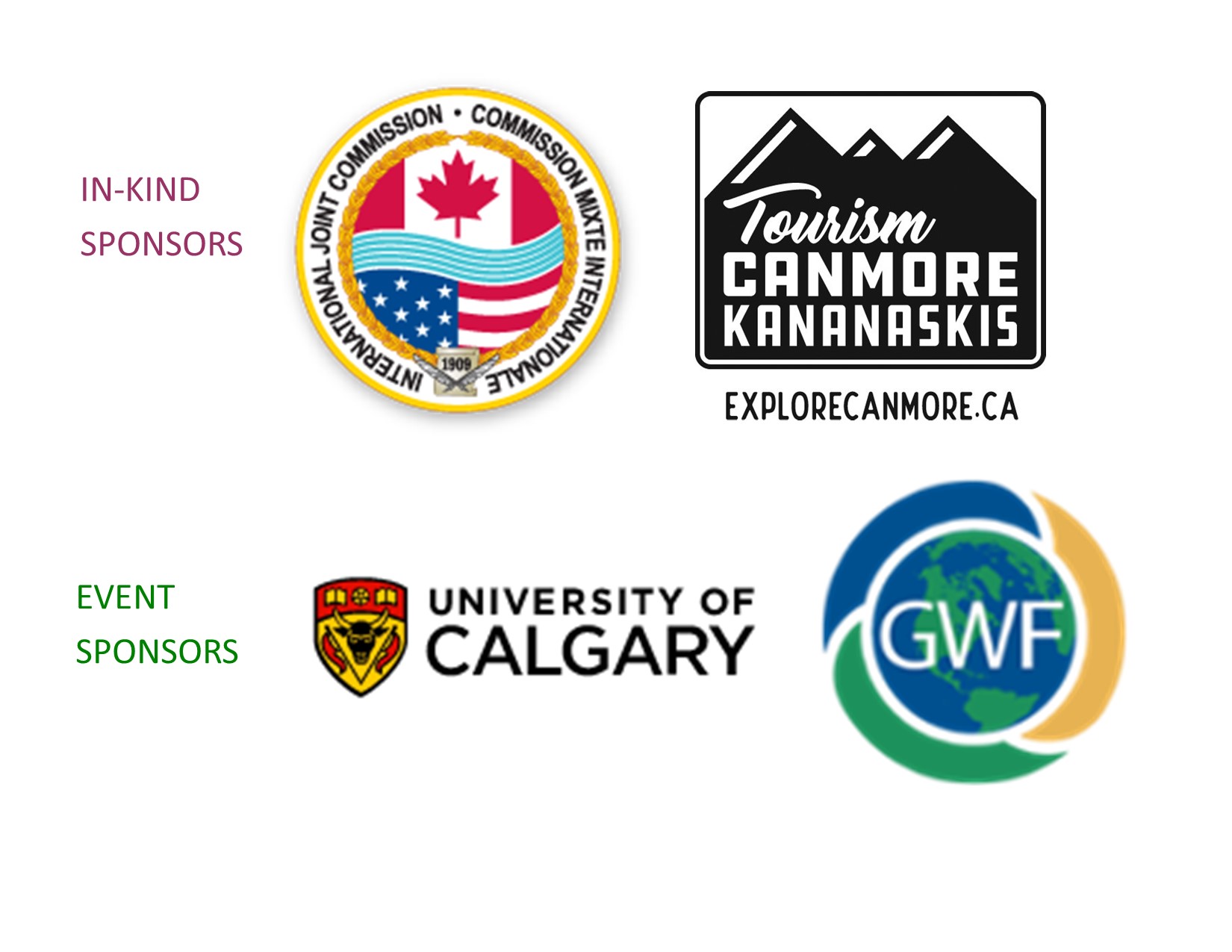 Thank you to our Sponsors and Exhibitors!

In recognition of the importance of Truth and Reconciliation in Canada, and the role we all have to play as stewards of our water resources, the 2022 CWRA National conference will donate up to 10% of all sponsorship proceeds to Indigenous Inclusion activities and themes throughout the conference. This recognizes the more significant (cost) barriers Indigenous Peoples have in attending such conferences, and recognizes the value gained in having all voices at the table for water resource discussions. Funds will support Indigenous keynote speakers, travel costs, events featuring Indigenous performers and Knowledge Keepers, and activities that support the participation and attendance of our First Nations and their youth.

Robert Sisson has been involved with the environmental organization ConservAmerica since 2006, where he has served as president since 2011, and more recently was appointed by Michigan Governor Rick Snyder to the state’s Environmental Justice Working Group in 2017. Mr. Sisson has also been involved in the government of the Michigan city of Sturgis, where he has served as mayor from 2005 to 2007 and as a city commissioner from 2003 to 2008 and again from 201 to 2016. Concurrently, he was a member of the boards of directors for both the Sturgis Economic Development Corporation and the St. Joseph County Economic Development Corporation. He succeeds former US Commissioner Dereth Glance, who served from 2011 to 2016.

Pierre Béland is a scientist in environmental biology and toxicology, best known as an expert on the conservation of beluga whales. He was a founder and research scientist with the St. Lawrence National Institute of Ecotoxicology, an NGO dedicated to research and education on toxic compounds in estuarine ecosystems.nDr. Béland has published three books, numerous scientific and popular articles, has hosted a TV series on the environment, and participated in several documentary films. He served for ten years as a Commissioner for BAPE, the Quebec environmental assessment Board. He has chaired public hearings for various agencies such as Parks Canada, Fisheries and Oceans Canada, Quebec Energy Efficiency Agency, and Telus. Previously he headed the Fisheries Ecology Research Center with the Department of Fisheries and Oceans Canada and was a paleoecologist with the National Museum of Nature. From Sept 1995 to Sept 1998, Dr. Béland was one of three Canadian Commissioners (and Acting Chair) with the International Joint Commission. Until recently he owned and managed a company manufacturing equipment for research and management of aquatic and marine ecosystems. His most recent duties were as a Director of AquaForum, whose AquaHacking Challenge is a Canada-wide competition for graduate students and innovators aiming to create start-ups in the field of water technology and the blue economy. Dr. Béland holds a BA and a BSc from Laval University (Quebec City), and a PhD from Dalhousie University (Halifax). He was a Post-Doctoral Fellow at ORSTOM Centre, New Caledonia, and at the University of Queensland, Australia. He resides in Montreal, QC; he is fluent in French and English and proficient in Mandarin.

Michael Miltenberger served in the NWT Legislature from 1995 to 2015, 14 of those years as a Cabinet Minister. His roles have been diverse, reflecting his broad interest in improving the effectiveness of the GWNT in bettering the lives of northerners. He has served as Deputy Premier, Government House Leader, Minister of Health and Social Services, Minister of Education, Minister of Finance, Minister of Environment and Natural Resources, and the Minister Responsible for the NWT Power Corporation. He is a member of the Forum for Leadership on Water (FLOW) and has worked extensively in the areas of water, the environment and working collaboratively with Aboriginal governments. From 2015 to the present Michael has been the Principal of North Raven and has continued to work on environmental issues, collaborative consent and governance issues, and energy. He was responsible for and led the development of the co-drafting approach in the NWT government that resulted in the new Wildlife Act and Species at Risk Act. He is co-leading (with Merrell-Ann Phare of CIER) a collaborative governance initiative (CLI) between indigenous and nonindigenous local governments in southern Manitoba and other jurisdictions in Canada. He has co-authored several papers on these and related issues. He was the senior political advisor to National Chief Norman Yakeleya of the Dene Nation 2018-21. Michael also sits on the Air Tindi Limited Board of Directors. Michael has a bachelor’s degree in political studies from the University of Lethbridge and Red Seal Journeyman Carpenter interprovincial certification. He lives in Fort Smith, NT.

Merrell-Ann Phare is a lawyer, writer and the founding Executive Director of the Centre for Indigenous Environmental Resources, a national First Nation charitable environmental organization. As Chief Negotiator, in support of Michael Miltenberger, Merrell-Ann led the negotiation of transboundary water agreements in the Mackenzie River Basin and the creation of Thaidene Nene, a national and territorial park in the NWT. A relentless champion of the concept of collaborative leaderships, Merrell-Ann also serves as a Commissioner of the International Joint Commission, which mediates disputes between Canada and the United States over water.

Ernie Campbell is a retired public servant living in Yellowknife, Northwest Territories. He spent 12 of his 30 years of service as a Senior Manager with the Department of Environment and Natural Resources for the Government of the Northwest Territories, his last 5 years as the Deputy Minister. Mr. Campbell is a Treaty 8 member of the Mikisew Cree First Nation in Northern Alberta. He grew up in Fort Chipewyan, spending most of his time living a traditional lifestyle on the Peace/Athabasca Delta in Wood Buffalo National Park. This area has international significance, the delta is the largest freshwater inland river delta in North America, it is recognized as a wetland of global significance under the Ramsar Convention and Wood Buffalo National Park is identified as a UNESCO World Heritage Site. This lifestyle, along with his parents’ teachings led him to develop a career in the Environment field towards promoting healthy ecosystems, he is passionate about sustaining clean abundant freshwater in the Mackenzie Basin. Today, Mr. Campbell continues to pursue a land-based lifestyle.

My career has thus far been dedicated to the advancement of Indigenous nations and the resurgence of Indigenous knowledge and governance as key features of ecological, cultural and economic sustainability. I was Chief of the Lutsel K’e Dene First Nation, President/CEO of Densoline Corporation, an MLA in the General Assembly of the North West Territories and through my consultancy I have had the following contracts, Chief Negotiator for LKDFN on the establishment of Thaidene Nene IPCA that included a National Park Reserve, Territorial Protected and Conserved Area’s resulting in the protection of 26, 380km2 of Lutsel K’e First Nations Territory, Senior Advisor to the Indigenous Leadership Initiative, (ILI), Advisor to DU Canada and worked with the NWT Treaty 8 Tribal Corporation as they negotiate their Lands, Resources and Governance relationships with both the Federal and Territorial Crown Governments. I have also held numerous other leadership roles, ranging from a CBC North Indigenous language TV as an Associate Producer to a Liaison Officer with Diavik Diamond Mines and recently been a core member of the Indigenous Circle of Experts to support Pathway to Canada Target 1. My primary contract today is leading Nature 4 Justice initiatives in Canada, a Social Justice NGO supporting Indigenous Nations who are advancing Indigenous Protected and Conserved Areas the carbon market and other Nature-Based Climate Solutions financing. Overall, I bring a holistic understanding of conservation economies plus other sustainable economic development for and with Indigenous communities. I have a strong ability to positively lead groups, communities, and projects, and to collaborate and work with diverse actors. My work supports the restoration of Indigenous relationships to their land through traditional practices, governance, and the exercise of their rights and responsibilities.

Tom Gleeson is a water nerd who leads the ‘groundwater science and sustainability’ research group at the University of Victoria. He grew up in Iroquois territory near the Six Nations of the Grand River and lives and works in Songhees, Esquimalt and WSÁNEĆ Territories. He loves new ideas, food and yoga, helping people and the world, and has received the AGU Early Career Hydrology Award, and founded the global groundwater blogging collective, water underground.

Tim Kulchyski is a Biologist and Member of Cowichan Tribes who grew up on the banks of the Xwulqw’selu Sta’lo’. Tim has worked with a variety of clients assessing upland, freshwater, and marine ecosystems for 25 years. His work often involves examining the impacts of development on cultural values. Tim has travelled extensively, studying the interaction between resource issues and cultural heritage. Over the past several years he was involved in a major Hul’qumi’num language revitalization initiative. Tim has been a member of the Cowichan Watershed Board since its inception in 2010.